Last month I took part in Christine’s new Know the Novel link-up.  This month we’ll be doing part two: Within the W.I.P! 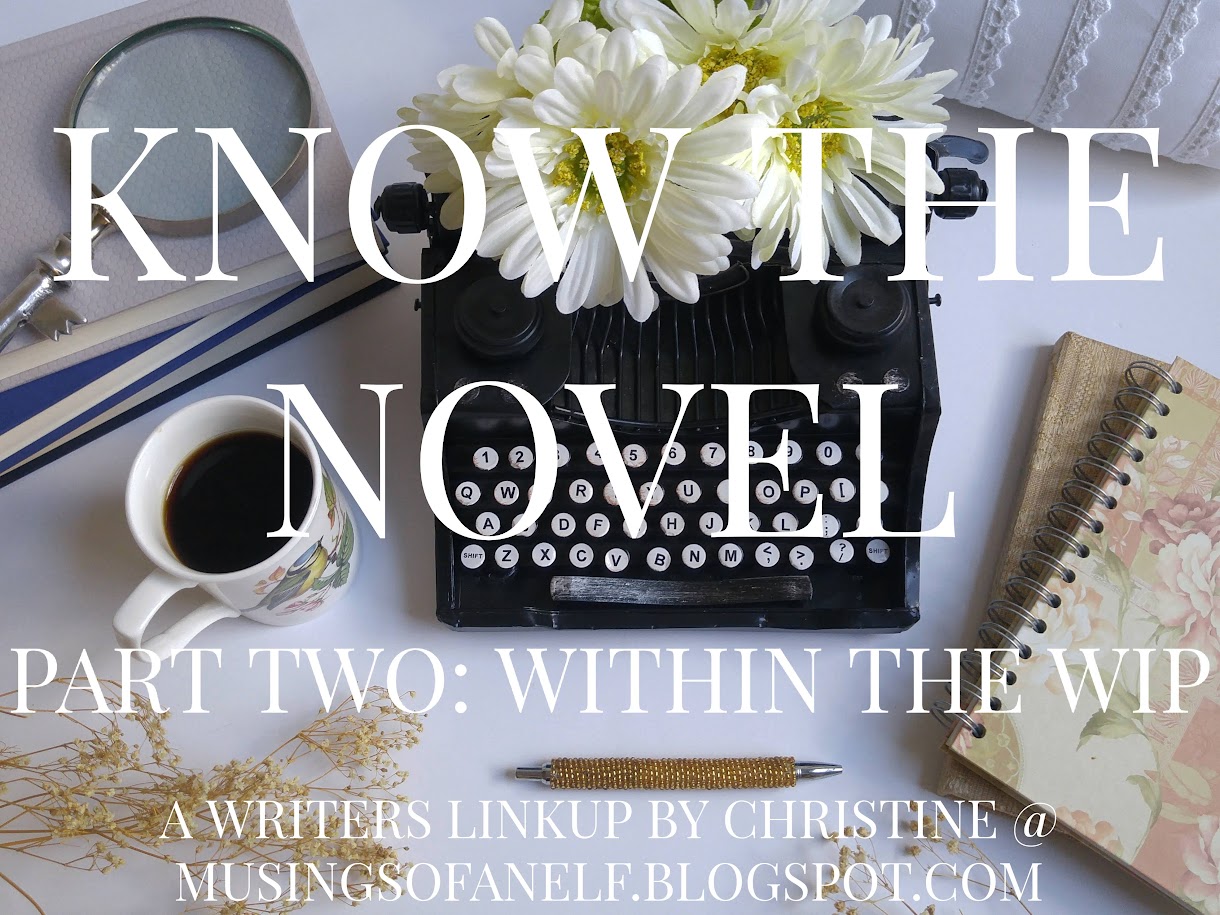 1. How’s the writing going?-   I’m shuffling along.  It’s not a bad pace, actually, but it is taking some time to get back into the rhythm of writing something longer than a children’s book.  I’ve been picking up speed lately, though!

2. What’s been the most fun aspect about writing this novel so far?-  It’s great being able to return to a story that has been set aside to marinate, and this time I’m delving deeper into the characters and worldbuilding, increasing the stakes… and I’ve included more food!  Not sure why I ignored that before.

3. Has your novel surprised you in any way?- I’m surprised at how much I left out during the first writing, and how much I’m now discovering about the characters and their world.

4. What do you think of your characters at this point?  Who’s your favourite to write about?-   I’ve spent the most time with Kinn.  She’s fun, with her love for her people and her planet.  Rieve is just the opposite… but I kind of enjoy writing grumpy people.

5.  If you were transported into your novel and became one of your characters, which one do you think you’d be? Would you take any different actions than they have?-  I’d probably be that poor port guard who has a run-in with Rieve and his associates.  I think I’d go through the same course of action and get into the same sticky situation.

6. Give us the first sentence or paragraph and then 2 (or 3!) more favourite snippets!-

I happily fill page after page in my sketchbook with the marvelous mayhem I see all around me.  Keremios’ reputation as a place of culture and contrasting beauty draws a colourful crowd.  One visitor at a cloth seller’s booth holds a strip of fabric up to the light filtering down from the domed roof.  She seems to be meticulously seeking a colour and pattern to match her feathers.  I try to capture her musing expression, unique to her species, as she examines a different cloth.

This will serve as opening scene for now.  The first few paragraphs weren’t quite in Kinn’s character, so they don’t count.  I’ll fix them later.

“Yeah– likewise, pal.” I mutter.  That’s probably the fifth one I’ve almost hit, not that I’m counting, and I’m not even halfway through Perendi Port yet.  The streets are as full as the sidewalks are, but that’s no excuse for the pedestrians to get them mixed up like that.  All this hard stopping is getting too much for my old bike.  I can hear her moan every time I start her up again.  I can’t get out of this place soon enough.

Here we meet Rieve, who is in character and in a bad mood– but I repeat myself.

Peering over Dad’s arm, I see the figure emerging from the maze of boulders.  He’s tied his scarf overtop his eyebrows and has even wound it back around to cover the lower half of his face.  He carries no gun that I can see, but his left arm is a prosthetic of polished metal.  This he raises in mock salute.  “You’ll pardon us for the damage to that fine bike,” he says, “but we were desperate to get a hold of you.”

And here we have Kinn, with her father, in trouble.

7. Have you come across any problem areas?-   Not really… but I did have to come to terms with the negative traits of my characters.

8. What is your biggest victory with writing this novel at this point?-  I’m just glad to get back to writing!  I was at first afraid this story wouldn’t be finished, but I’m enjoying it again and every improvement feels like a victory.

9. Be honest, have you killed any characters off yet?-  As I mentioned before, this is a re-write.  Some poor characters are going to have to die a second death.  But I have not yet reached that point…

10.  Take us on a tour of what a normal writing day for this particular novel has looked like.  Where do you write?  What time of day?  Alone or with others?  Is a lot of coffee (or some other drink) consumed?  Do you light candles?  Play music?  Get distracted by social media (*cough, cough*)? Tell all!-  I like to start after morning devotions, before the day’s busyness starts.  I have coffee by my side, and sometimes I have a bit of yogurt and fruit as well.  The next best time is just before bed, with some mint tea (and, if I’m fortunate, a snack) for fuel.  Most of the time I write without music.  In the morning I can write with discipline… but if I start with opening mail I’m bound be distracted.

With that, we end part two of Know the Novel.  Thanks to Christine for these great questions!  I look forward to part three.

View all posts by To be a Shennachie

One thought on “Know the Novel Part Two: Within the W.I.P”

Finding Laughter and Refreshment One Day At A Time

the writerly ramblings of a whimsical bean

in everything, God is good

- stories that grow with you -

Amateur theology all week long. But especially on Mondays.

Medical Fact for your Fiction

The Road of a Writer

Stories will not be written easily. A story without a heart is dead, and the only place it will get a heart is from the author.

The weird and wonderful ramblings of a Kiwi girl

A blog about anything, everything, and nothing

discovering the art of sharing stories